Wieland Hoban is a composer, translator and executive member of the organisation “Jüdische Stimme für gerechten Frieden in Nahost” [Jewish Voice for just peace in the Middle East]. He represents the organisation in the organisation IJCJP (International Jewish Collective for Justice in Palestine).

ES: At the beginning of February, Wieland – in your capacity of executive member of the “Jewish Voice for a just peace in the Middle East”, you received an answer to a letter that you’d written to the Berlin senate in November. In the letter you had criticized the appointment of the social scientist Samuel Salzborn as the state of Berlin’s contact person for antisemitism. Why?

WH: The severe criticism came from our horror that Salzborn had been given this post. The letter set out our points of criticism: for example, Salzborn had reacted polemically to the simple usage of the term “Palestine”. He had denied the Nakba (the mass expulsion of Palestinians which preceded the establishment of the State of Israel), and he claimed that people only left because some big landowners had sold their plots of land. He also denied the existence of Islamophobia as a matter of principle. He called for the removal of the term, because he saw it as a provocation.

Salzborn uses every opportunity to blame left wingers or Muslims for antisemitism, paying less attention to the large virulent danger from the right. He and other like minded people mainly speak about what they call ‘Israel-related antisemitism’. This also exists to an extent, but does not pose an important danger to Jews in Germany. This is why we asked for urgent talks.

At first we sent a letter to the senate administration by post. Some weeks later, we also sent an e-mail, with the document attached. Then I rang them every couple of weeks to see what was happening, but each time I was brushed off. They said, the answer was in progress, and we would hear from them very soon.

Finally I tried to apply more pressure and shortly afterwards they did send a very insubstantial answer.

ES: Were your points of criticism addressed?

WH: Absolutely not. The answer mainly consisted of a replication of information that was already known. The job had been announced, many people had applied, and Salzborn was the most qualified candidate. The process was over, and therefore they didn’t find it “productive” to organise a meeting. None of the criticism was addressed, which wasn’t surprising. They couldn’t have done so without looking very bad.

ES: Salzborn is also known for accusing the party Die LINKE of antisemitism. But he got his job from a government in which die LINKE is a partner. How can you explain this?

WH: I think that no one really concerned themselves with the facts. He was a ‘specialist’ on antisemitism and had written about it. Essentially he is part of, let’s say, an antisemitism industry, in which certain theoretical models are used to endlessly repeat the same theorems, often referring to the work of Theodor W. Adorno.

This also corresponds to the so-called “Anti-Deutsch” tendency. Virtually no one has concerned themselves with the substance. Maybe they’ve looked at Salzborn’s resumé and thought that he’s a qualified academic, has published some things and maybe there were certain personal relationships.

It’s also the case that in Germany – for understandable reasons – there is too little knowledge about questions which concern Jewish subjects, ideas or also sensitivities. Then there’s the obvious support for the State of Israel, and Salzborn positions himself as very strongly pro-Israeli. That was also important to the administrations because they thought: “antisemitism is about Israel, Salzborn is pro-Israel, so that’s good”.

ES: How does the appointment of Salzborn as contact person for antisemitism affect critical Jewish voices in Berlin? It’s clear that he won’t talk to your organisation.

WH: You could say that it is a slap in the face. But we know from experience that such voices like ours are thin on the ground in Germany. People with similar beliefs tend to hold themselves back rather than going onto the offensive as the discourse has been poisoned. If you want to join it, you must also be prepared to go to battle or to stand up to great defamations.

ES: What is the role of the Israeli government of prime minister Benjamin Netanyahu? For example in 2018, Netanyahu sent a letter to Chancellor Angela Merkel demanding that the Jewish Museum in Berlin should not receive any financial support because the institution supported the pro-Palestinian campaign Boycott, Divestment and Sanctions (BDS). But the museum had not supported BDS.

WH: And although Merkel clearly rejected this request, the museum director Peter Schäfer met so much hostility that he eventually stood down. There are cases where the Israeli government really is involved, such as with the museum. Sometimes this is not from high positions, but through associations which have links with the government. As soon as you talk about this, you are countered that this is an antisemitic conspiracy theory. Even when you can prove it, connotations are made of some lobby or some government controlling everything from afar.

ES: Your organisation has been criticized by various Jewish institutions, societies and initiatives – in particular when you received the Göttinger Peace Prize in 2019

WH: There was also an attempt to prevent the prize giving ceremony by withdrawing permission to use the rooms. Fortunately this could be circumvented by using a different venue. On top of this, our bank account was closed because of allegations of antisemitic activities.

ES: Are the attacks on you still going on?

WH: We are a very small group, so not everyone pays attention to what we do. But we are working with others, and there was also the “Initiative GG 5.3 Weltoffenheit”. That aims to stop people being muzzled because of a real or alleged relationship with BDS, or a critical attitude towards Israel. This is very important as it brings the debate about BDS in the foreground again. The government wants to stifle discussion on the topic, especially a report from the ‘Research Services of the Bundestag’ which contradicts their views.

This report was commissioned by Felix Klein, the government’s antisemitism commissar, because he expected that the Bundestag anti-BDS resolution of the previous year was legal and would receive an official confirmation from the report. But the Research Services came to the conclusion that the resolution constitutes an excessive interference with the freedom of opinion, and that if it were made legally binding, this would be unconstitutional.

The resolution is curious in that despite its non-binding status – the Bundestag lawyers classified it as an expression of opinion – it almost had the effect of a law. This because it has been generally accepted on the ground. If you invite someone to a meeting and they can be put in some sort of relationship with BDS, you get no support, rooms, money etc. This leads to self-censorship and self restriction.

The discourse has now arrived at such a level that people like Salzborn or Felix Klein can also accuse Jewish people of antisemitism, for example when they support BDS. There is not the slightest attempt to listen or to want to understand, why they engage themselves like this. It is moreover pretty arrogant of them to claim this sovereignty of the discourse.

ES: Similar things happened in Great Britain. When Jeremy Corbyn was leader of the Labour Party, there were allegations of antisemitism against the party in order to discredit him.

WH: Exactly. There wasn’t such a resolution in Great Britain, and in principle BDS as a term is not used as strongly to delegitimize people as in Germany. That is also connected with the Bundestag resolution, which was able to reduce a whole movement – that of Palestine solidarity – to 3 letters.

But it’s not the case that everyone who stands up for justice in Palestine is automatically for BDS. It’s also not the case that everyone who supports BDS believes that anyone who does not do this is at fault. The whole debate has been reduced to this. If someone argues for the Palestinians, without mentioning BDS, they are immediately asked: “Are you for BDS or not?” Or they are told “That’s going in the direction of BDS”. It is no longer possible to talk about the substance.

My hope is that through the ‘Initiative GG 5.3’ or the report from the Research Service, it will become less natural to reduce this discourse to 3 letters, or that BDS is something which can’t be discussed, something antisemitic. Then the discussion can be: what is BDS about? Why should it be antisemitic? Why it is not antisemitic? And, why are there also Jewish people who support BDS or Palestine solidarity as a whole?

ES: When the fight against antisemitism is so important for the Israeli government, how can they maintain good relationships with some ultra-right governments in Europe?

WH: That is because the government, and above all Netanyahu, are absolute opportunists. It is more important to them to have allies – above all against Muslims. They don’t care what Hungary’s premier Viktor Orbán thinks about Jews. The notorious tropes – for example, that George Soros manipulates world events, continuing the old antisemitic propaganda lie of a “Jewish world conspiracy” – these are also things which Netanyahu says himself, because a powerful Left supposedly threatens his rule.

In Poland there was a law which essentially banned any recognition of any Polish complicity in the Holocaust. Shortly after, Netanyahu was in Poland, and was not at all disturbed by this, because that’s not important to him as long as Poland’s political leadership is pro-Israeli.

Or Netanyahu’s tolerance for ex-US president Donald Trump, who has made many antisemitic statements, but who is also pro-Israeli. If the Israeli government or its defenders speak of antisemitism, they often mean an opposition to or critical opinion of Israel. They can no longer separate Israel from Jews as a whole.

ES: A further controversy was the appointment of Ephraim Eitam to the post of director of the Israeli memorial to the victims of the Shoah, Yad Vashem, at the end of 2020. In the past, he has insulted the Palestinians as a “cancerous growth in the body of the nation”. After protests, the appointment was withdrawn, and now there is an interim director. Why was there a calculated choice of Eitam for the job?

WH: The procedures have made it very clear that the memory of the Shoah is political in Israel. It shows how important it is that people in decisive positions are to some extent anti-Palestinian. Eitam is definitely that – to a more noticeable extent than others.

But that is not so rare as it should be for high-ranking officials in Israel. And this does not just work against Palestinians, but also against migrants and refugees from Africa, usually from Sudan. They have already been designated by high-ranking politicians as a “cancerous growth” in society. This virulent racism comes from the state doctrine that Israel is Jewish. This means that Jews are at the top and other communities must be subordinate. 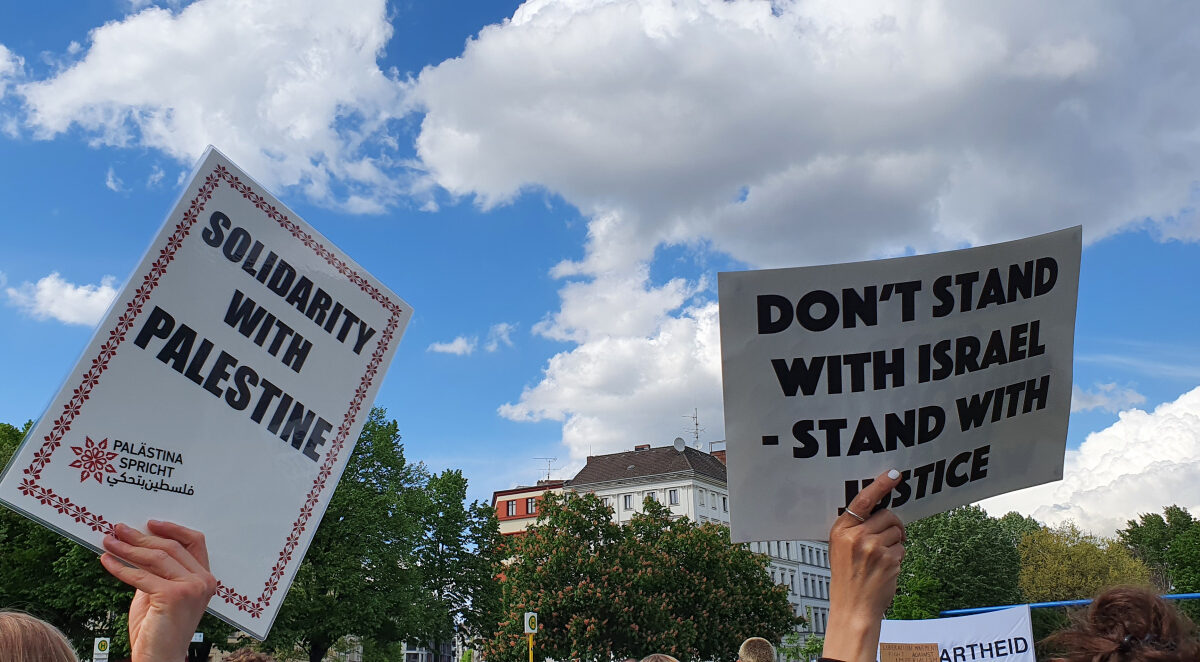