As the judgment from the extradition appeal hearing of Julian Assange at the Old Bailey, in London, is imminent, another glut of articles about WikiLeaks is permeating a broad range of media platforms. As this case has been dragging on for over ten years the central issues have been expounded many times already.

This article tells a different narrative and will focus on a Berlin street-art intervention initiated in 2016. It  still operates as a locus that draws attention to WikiLeaks and Julian Assange.

A sculpture forms a small roundabout at the junction between Kohlfurterstraße and Admiralstraße in Kreuzberg Berlin, just a few hundred yards from Kottbusser Tor U-bahn station.

Ludmila Seefried-Matějková was commissioned by the West Berlin authorities to create the sculpture in 1985 when the city was still divided. She titled the work, “Doppelganger Admiral”

This screen shot of the sculpture in July 2008 shows one of the most notable features at this point in time is the amount of graffiti all over the sculpture… Graffiti or “tagging?” That is a defining issue in “Street art”… Is it art? Is it vandalism? For now we skip over this graffiti debate. 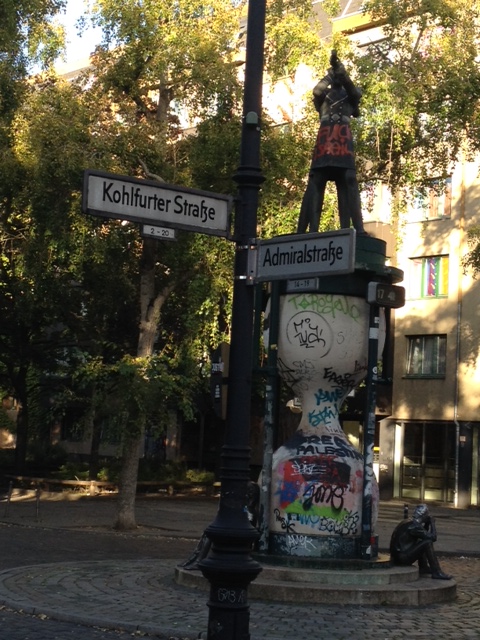 Ludmila Seefried-Matějková is a Czech sculptor who was commissioned to make a series of sculptures for the city of Berlin. She is 83 years old but is still actively sculpting. She opened an exhibition of new work a few months ago.

Seefried-Matějková’s sculpture commemorates the time Admiralstraße underwent a radical change in the early 1980’s. Old buildings were demolished and new ones created. Seefried-Matějková responded to that by creating an hourglass – an ancient mechanical instrument symbolising the passage of time.

The massive concrete hourglass in the middle of the road is what most people first noticed. But there is more to the sculpture. Embedded in the surrounding metal work is a still working old fashioned type of digital clock, although when installed it would have been a futuristic state of the art time-piece.

On top of the hourglass are two semi-fused, back-to-back, larger-than-life admirals looking through their telescopes. Is one looking to the future and the other looking to the past, whilst in the “now” of the hourglass? Do they represent the divided city as they look both East and West? It is a sculpture that raises questions, not providing standard establishment certainties.

Whilst cleaning the sculpture we realised how easily the admirals spin. We think there was a time when they were constantly revolving. It would be great to have that story confirmed from someone who can remember seeing them spin. It would be interesting to know how slowly or quickly they moved.

Another significant element to the sculpture are two bronze figures sitting at the base of the hourglass. One is a man playing a harmonica and the other is a punk woman. These figures are slightly larger than life and are informally placed encouraging people to engage directly with them.

They fit in Seefried-Matějková’s broader body of sculptural work.

This sculpture is of interest in relation to Julian Assange and WikiLeaks because the WikiLeaks logo is an hourglass – and it is located in what was then the parliamentary constituency of Hans-Christian Ströbele.

Ströbele was one of the first people to travel to Moscow to meet Edward Snowden. 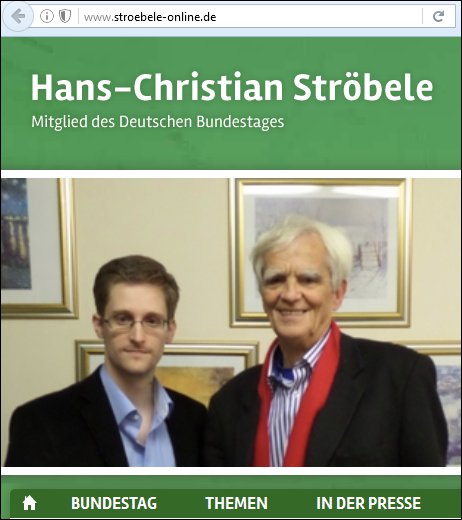 When Herr Ströbele MP and Frau Seefried-Matějková were informed about the idea to paint the hourglass sculpture with the WikiLeaks logo, they both responded positively.

Ströbele got permission from the City for the hourglass to be painted , after Seefried-Matějková gave consent to her work being re-appropriated with a three dimensional version of the WikiLeaks logo. 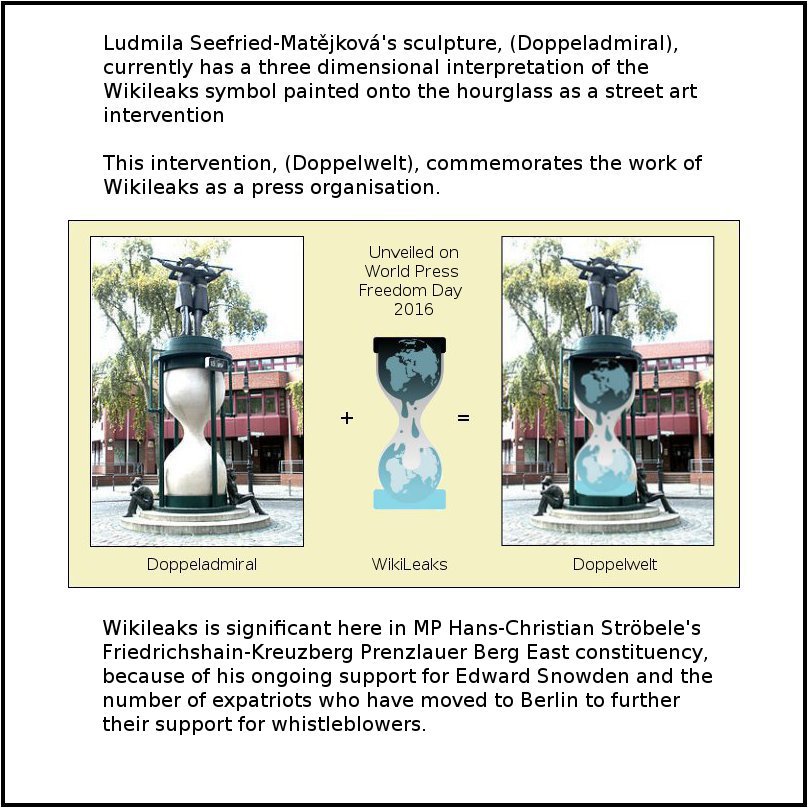 After the hourglass was painted it was publicly unveiled on the United Nations World Press Freedom Day – May 3rd 2016. Unfortunately Seefried-Matějková was unable to attend. However Ströbele spoke at this unveiling event with Sarah Harrison. 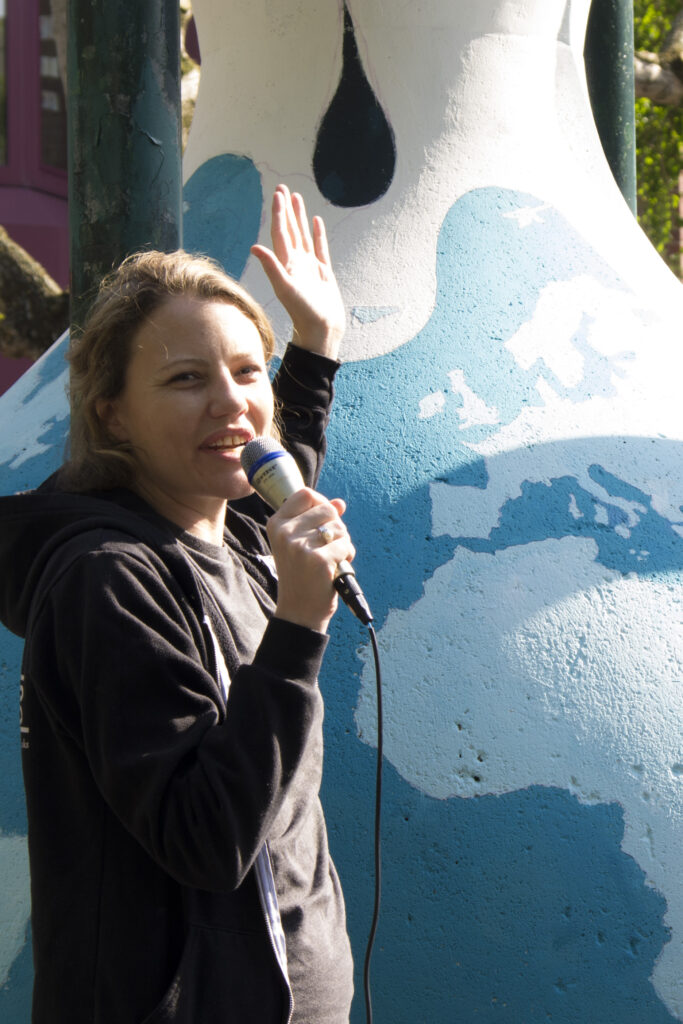 Sarah Harrison had worked for WikiLeaks and moved to Berlin after escorting Edward Snowden to Moscow. They had been trapped in Hong Kong airport for a number of weeks until Russia granted him asylum.

The sculpture became a focus, as exampled in the “Vigil for Julian Assange” held there on the 20th November 2019, organised by “Candels 4 Assange”. 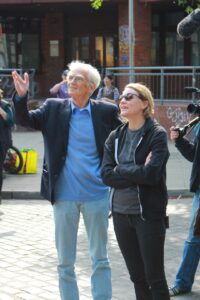 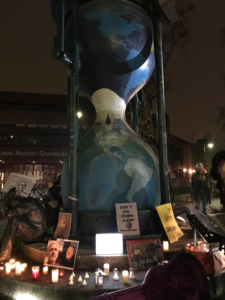 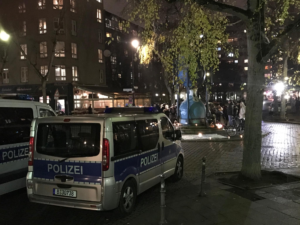 The ongoing imprisonment of Julian Assange and the hourglass sculpture on Admiralstraße are given added potency by another of Seefried-Matějková’s Berlin sculptures. This one is above the main prison gates in Moabit depicting the “hand of justice” raising and lowering a cage around a prisoner. 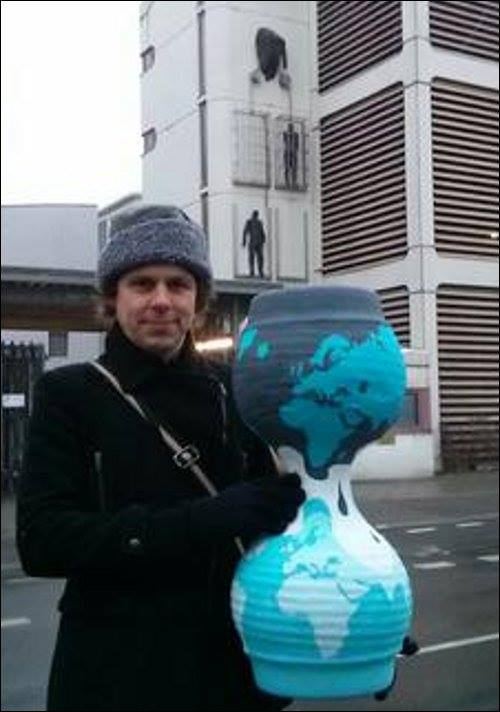 Julian Assange’s  case has greater significance beyond his personal situation. Because  it reflects upon the public’s right to know about what wrongdoing their governments are doing in secret.

The newly painted sculpture was named – “Dopplewelt” (double world). It refers to the images on the hourglass of two globes to symbolise an old corrupt world leaking and creating a new world.

This image offers both the vision and crux of what is at stake in this trial. The world as presented to us by the compliant mass media is only a partial and very biased reflection of the geopolitical reality. Clearly a free independent investigative press is essential for a healthy democracy. 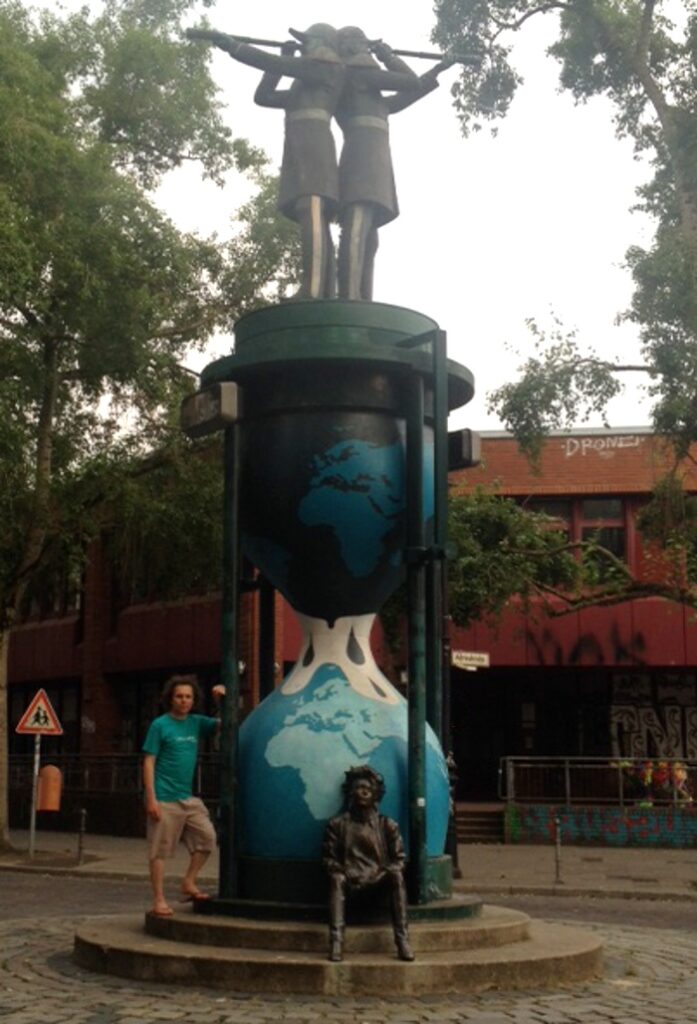