I’m sure I’m not the only person in Berlin who gets visits from socialists from other countries and wonders where he can take them. Of course it’s great to take people to the Marx and Engels statue in Alexanderplatz, the memorials to Rosa Luxemburg and Karl Liebknecht in the Tiergarten, and Bertolt Brecht’s Berliner Ensemble. But it’s sometimes good to have a surprize up your sleeve,

This is an article about the less well know monuments in Berlin which might be interesting to a left-wing audience. As a prelude to the political walking tour on 15th May, this article restricts itself to sights in East Berlin. Watch this space for a similar article that I’m intending to write on West Berlin.

Karl Marx studied law in Berlin University in 1836. In April 1837 he moved to a flat in Treptow on the street that’s now called Alt-Stralau. In 1962, the DDR government decided to erect several monuments to Marx. One of them was a series of sandstone memorials by the sculptor Hans Kies near his former flat. These were erected in 1964.

On one side of one memorial, we see a profile of Marx’s head. On the other side, a scene from a beer garden where Marx was trying to convince young Hegelians about the need for Communism. On another memorial, we see a picture of a general strike initiated by glass workers, opposite the words “The Philosophers have interpreted the world, the point is to change it”.

The memorials are part of a number of monuments to Marx, and are also very close to one of the prettiest parts of Berlin, just across the river Spree from Treptower Park (site of it’s own memorial).

If you leave the Frankfurter Allee station and walk down the main street, it is quite likely that you will miss a plaque on the wall of the main street. But if you look closely, you can see the inscription “V. I. Lenin took part in a workers’ meeting in this building in August 1895”.

Little information seems to be available about this meeting, but what we do know is that Lenin lived in Berlin between July and September 1895, where he was trying to make links with German socialists. Among others, he met with William Liebknecht (father of Karl), a founding member of the SPD.

In a letter to his mother, Lenin wrote “a few steps away from me is the Tiergarten (a splendid park, the best and biggest in Berlin), the Spree, where I bathe every day, and a station of the urban railway. There is a railway here that traverses the whole town (above the streets). The trains run every five minutes, so it is easy for me to go “to town” (Moabit, where I am living, is actually considered a suburb).

The only bad thing is the language—I understand far less conversational German than French. The pronunciation of the Germans is so unlike what I am accustomed to that I do not even understand public speeches, although in France I understood practically everything in such speeches from the very outset.”

Any similarities with the present are, of course, entirely coincidental.

Barnimstraße was Berlin’s main women’s prison between 1864 and 1974. It is now most famous because Rosa Luxemburg was imprisoned twice here – for two months in 1907, and for a year in 1915-16. Over 300 women who resisted the Nazis were also sent from the prison to be executed in Plötzensee. Other prisoners include opponents to DDR, prostitutes and women who had had illegal abortions.

Luxemburg was first imprisoned in 1904, and over her life she was jailed for class hatred, conscientious objection and treason. The current site contains a sign reading “here stood the women’s prison where Rosa Luxemburg was detained because of her revolutionary attitude”.

A few doors down from the Brecht-Haus, whose garden contains the graves of Brecht, Hegel and others, there’s a monument which was built by East German sculptor Dietrich Grüning in 1977. At the top of the monument, there’s one word: SPARTAKUS. Below is a quote from Karl Liebknecht: “That means fire and spirit. That means soul and heart. That means will and deed. The revolution of the proletariat”.

At the back of the monument there’s an explanation of why it’s there. “This is the place where the Spartacus Group, the nucleus of the Communist Party of Germany, was formed on 1st January 1916 under the leadership of Karl Liebknecht”. I guess that it was a big public meeting point in DDR times.

Now it stands in the garden of expensive flats, and you can only see it by waiting outside for someone to come out and leave the gate open. I only found out about it all when I was researching an article about the Spartacus film. What we’re left with is a Liebknecht quote on a statue that is only accessible to rich tenants. Who said Germans have no sense of irony?

Hidden away in a back street around the corner from the Fernsehturm, there is a memorial to the women’s uprising of 1943. In February 1943, a new wave of deportations was planned. This affected, among others, 1,500-2,500 Jewish people, mainly men who had been in mixed marriages. They were taken to the former Jewish Welfare Administration on Rosenstraße 2-4.

On 27th February, the non-Jewish wives and the children of the imprisoned men assembled in front of the building, calling for a release of their family members. 600 women protested every day for a week, resulting in some prisoners being released on 6th March. Others were not as lucky – on the day before, 25 of the prisoners in Rosenstraße had been deported to Auschwitz.

In the words of one protestor: “One day the situation in front of the collecting centre came to a head… The SS trained machine guns on the women: ‘If you don’t go now, there are orders to shoot.’ But by now the protesters couldn’t care less. The women screamed ‘you murderers!’ and everything else.” The women survived and no-one was punished for taking part in the protests.

The site of the demonstrations now contains a sculpture made in 1995 by the Jewish Communist Ingeborg Hunzinger. It includes women and children waiting anxiously. Opposite stands a sculpture sitting on a park bench – a privilege which was denied to Jews in 1943. 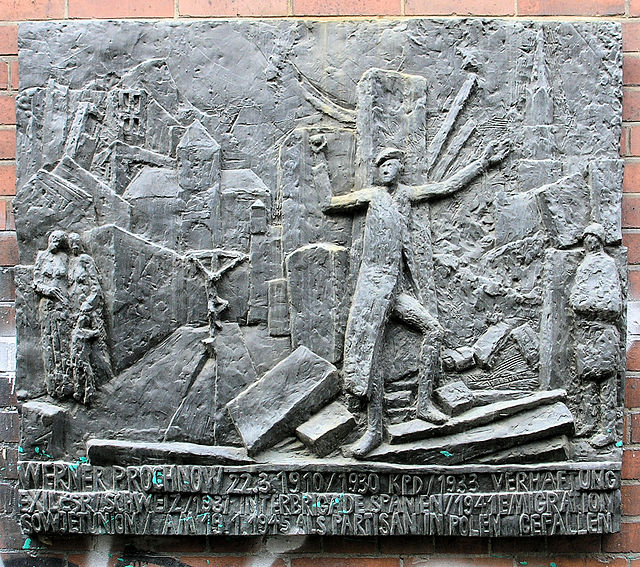 Werner Prochnow was a baker and a leading member of the German Communist Party. In March 1933 he was captured by the SA. He was able to escape and emigrated to Czechoslovakia and Switzerland. In 1937 he joined the International Brigades in Spain.

Prochnow was imprisoned in internment camps in France and North Africa, but managed to flee to the Soviet Union in 1943. In 1944 he was sent behind the front lines to make contact with German partisans In 1945, he was captured by the SS and shot on 19th January.

There are 2 memorials to Prochnow, not far from each other. The first is a plaque on Greifenhagener Straße showing a man and woman protecting a child in the background, and a soldier raising a fist in the foreground. The second is outside his old house in Wichertsraße, and contains the text “The anti-fascist Werner Hermann Prochnow lived here. Born: 2 March 1910. Fell in the common partisan fight against the SS.”

On the edge of Marzahn, near the border with Brandenburg, you can’t help seeing a house with “21 April 1945” written on its wall. Above the date are the words “Victory” and “to Berlin” written in Russian. 21st April was the day that Russian troops first reached the Berlin border. It is claimed (and disputed by others) that the Haus der Befreiung (House of Liberation) was the first house in Berlin on which a Soviet flag was hoisted.

In 1980, on the 35th anniversary of the end of the war, the house was renovated and the inscription was added to the wall. A memorial stone was also added, reading “On the way towards the liberation of Berlin from Hitler fascism, Soviet soldiers hoisted the red flag of victory.”

In 2015, there was an attempt to sell off the Haus, and it has been empty since. Selling the Haus could have meant losing the monuments to the defeat of fascism. With the help of over €1 million, mainly taken from old DDR institutions, it is being renovated once more. After renovation, the plan is to make the Haus available to people with a refugee background.

This is another memorial that is hidden in the backstreets, not far from the old Stasi prison (now a museum), and hidden behind a playground. It is a memorial to soldiers who died when the Red Army fully captured Hohenschönhausen on April 25th 1945, 4 days after they entered Berlin.

The memorial consists of a largely symmetrical wall, on each side showing a Soviet soldier standing over a surrendering German. At the side, plaques say “Eternal glory to the heroes of the Soviet army” in Russian and German. In front of the wall is a single red star.

The memorial was first built by the Soviet sculptor Ivan Pershudchev In 1947, and then moved to the Soviet memorial in Schönholz (see below) the following year. It was re-modelled in 1975 for the 30th anniversary of the liberation of Hohenschönhausen.

Many people have visited the  Soviet War Memorial in Treptower Park. And so they should. The Stalinist architecture is impressive, if slightly excessive. Much less known is the similar memorial in Schönholzer Heide, just on the edge of Wedding. This is a graveyard for more than 13,000 Red Army soldiers who died in the Second World War.

Schönholzer Heide was an old recreational area, which in Nazi times was used as a camp for forced labour. In the late 1940s, the Soviet architects Constantin A. Solovyov, W. D. Korolyov, M. D. Belavenzev, together with sculptor Ivan G. Pershudshev designed the memorial park.

The main part of the memorial is a huge field surrounded by plaques containing details of the people who are known to have died in the war. On the edge are 16 burial chambers, each containing over 1,000 dead soldiers. At the edge of the field, there is a 33½ metre high obelisk. Behind the obelisk there is a memorial stone remembering Russian soldiers who died in German prisons. 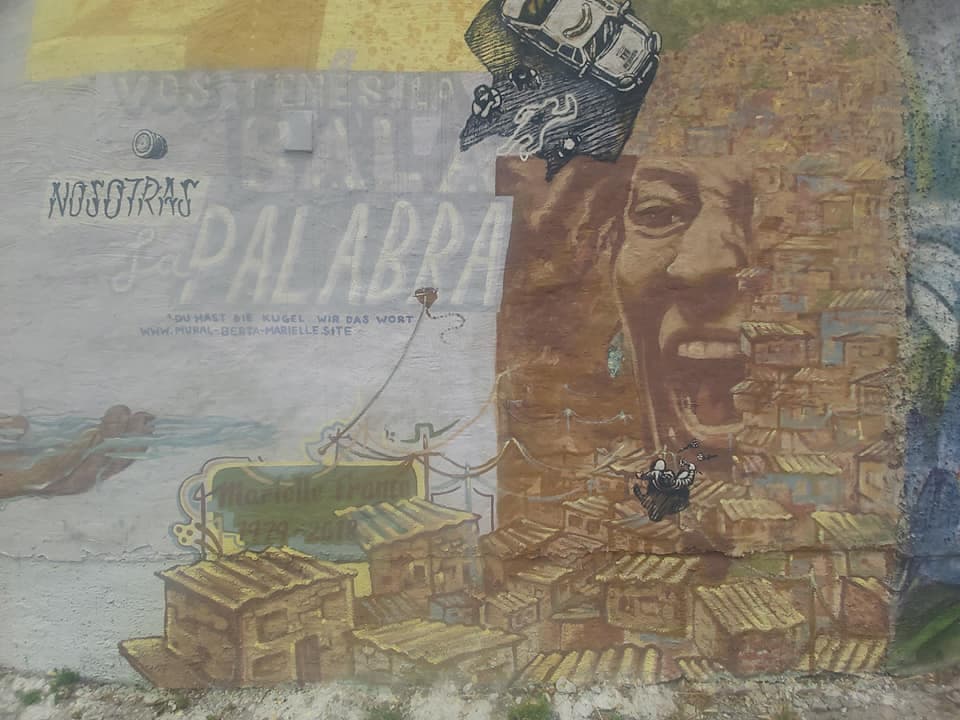 I was walking from Wedding through Prenzlauer Berg, and all of a sudden I saw a familiar face on the side of a house. Marielle Franco was a Brazilian activist and politician who became a city councillor in Rio de Janiero for the PSOL party, a left wing split from Lula’s Workers’ Party. In 2018, she was murdered. Two former police officers were charged with her killing.

Berta Cáceres was an indigenous leader and environmental activist in Honduras. She was an important member of the campaign that stopped the building of the Agua Zarca dam at Rio Gualcarque. She too was murdered after being on the hitlist of the Honduran military.

So what are they doing in a wall in one of Berlin’s more gentrified districts? Firstly, there’s the complicity of German companies Voith and Siemens in building the Agua Zarca dam. Then there’s the gun used to murder Marielle Franco, which was produced by the German arms manufacturer Heckler and Koch.

The mural was initiated and implemented by CADEHO (human rights collective for Honduras) and Kollektiv Orangotango (collective for critical education and creative protest). It was designed and painted by Fonso, La Negra and Soma, three Colombian artists. They encourage you to become active for justice for Marielle and Berta and an end to the complicity of the German arms industry.

The Berlin LINKE Internationals walking tour of East Berlin will take place on Saturday, 14th May at 10.30am. Meeting point is the Luther statue at Alexanderplatz