What support should Marxists give to Russia?

We recently reviewed the stand-off in the borders around Ukraine between the USA-NATO, European Union, Ukraine and Russia. However we note disturbing signs of an opportunist support for Russia from some sections of the Marxist left. They prompt these theses to spur potential debates at this critical time – within Marxist circles.

Thesis 1: In today’s world, any war is unlikely to be a localized affair.

Modern war inevitably becomes part of the international rivalry between the imperialist nations. As these become wars for power and markets – whatever was the initial spur – they become unjust wars between (at least) two sides. In such unjust wars, Lenin points out that:

“It is the duty of the socialists of every country to wage an unrelenting struggle against the chauvinism and patriotism of their own country (and not only of the enemy)”.

It follows that while the socialists of every ‘home’ country must to the maximum, struggle against jingoistic war-fury of their own country, they must also expose the chauvinism of the ‘enemy’. Despite this injunction, at the present time as trumpets blare in Europe and Ukraine, many Marxists and socialists in the Western imperialist heart-lands one-sidedly emphasise the belligerence of only their own ‘home’ countries. For example in the USA, the UK or Germany. Many are reluctant to state that the Putin government has had any role in this current escalated stand-off.

Thesis 2: Such one-sidedness may flow from beliefs that the ‘enemy’ state is not imperialist.

Such assertions have been frequently heard by Marxists, applied to both Russia and China. Here we focus mainly upon the assertions about Russia rather than about China. However a general point about both is necessary at the outset: the predominant role of state ownership of industry and portion of industry is no bar to being a capitalist state.

Bland pointed out using materials from the post-Khruschevite USSR that the mask of state management of industry did not prevent profits being made by a managerial class [W.B.Bland, ‘Restoration of capitalism in the USSR, and W.B.Bland,; ‘An open letter sent on behalf of the Communist League to the ‘New Communist Party’ Compass; No. 92, November 1991.] Many others from differing positions within Marxism have also taken this position.

Thesis 3: Whether a state is designated as an imperialist state, has long been defined for socialists by Lenin.

We must give a definition of imperialism that will include the following five of its basic features:

(1) the concentration of production and capital has developed to such a high stage that it has created monopolies which play a decisive role in economic life;

(2) the merging of bank capital with industrial capital, and the creation, on the basis of this “finance capital”, of a financial oligarchy;

(4) the formation of international monopolist capitalist associations which share the world among themselves, and

(5) the territorial division of the whole world among the biggest capitalist powers is completed.

Thesis 4: Marxists correctly point out that currently, the USA is the most powerful both economically and militarily – the most dangerous imperialist power.

This is apparent by Lenin’s detailed criteria, although we will not here belabour this point. However it is also seen in a detailed comparison of the strength of various powers, using a multi-dimensional tool as proposed by Norfield. This tool can be said to subsume the criteria of Lenin into a measurable ‘power’ ranking. By this Norfield measures GDP, Foreign assets held, international banking strength, foreign exchange holdings, and military expenditure. 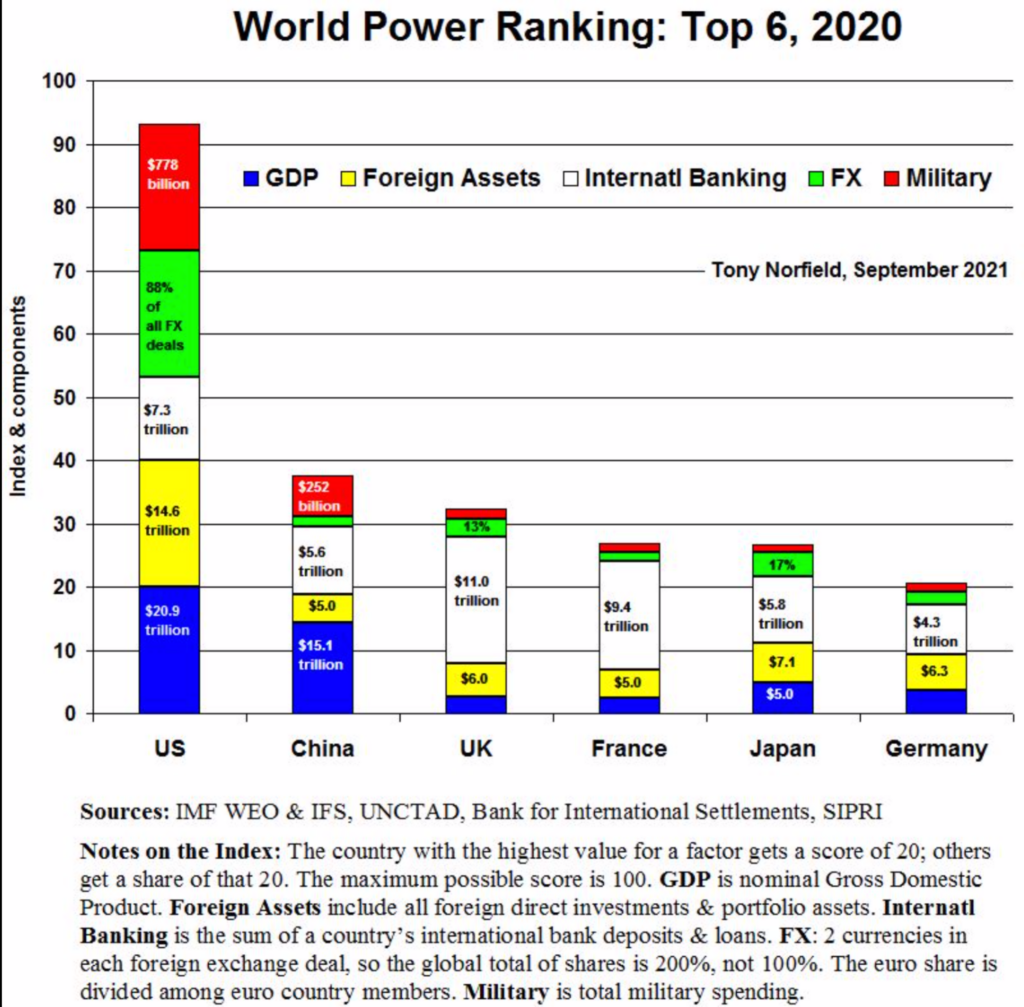 Thesis 5: We do not challenge this emphasis on the primacy of the USA as the currently dominant imperialist nation as being correct. However it is too often coupled with a serious distortion.

This distortion minimises the rampant imperialist behaviours of other countries, most latterly Russia. Such ‘minimisers’ under-estimate the ability of the international working people to appreciate that there can be more than one villain on the world stage. Those who minimize the imperialist actions of Russia undermine the working peoples of all countries and an international solidarity.

Thesis 6: It is true that Russia is not one of the most leading imperialisms today, as seen using some measurements provided by Norfield. But this belies its military strength and the regional impact it has in the Eastern sector, and other factors as described below. 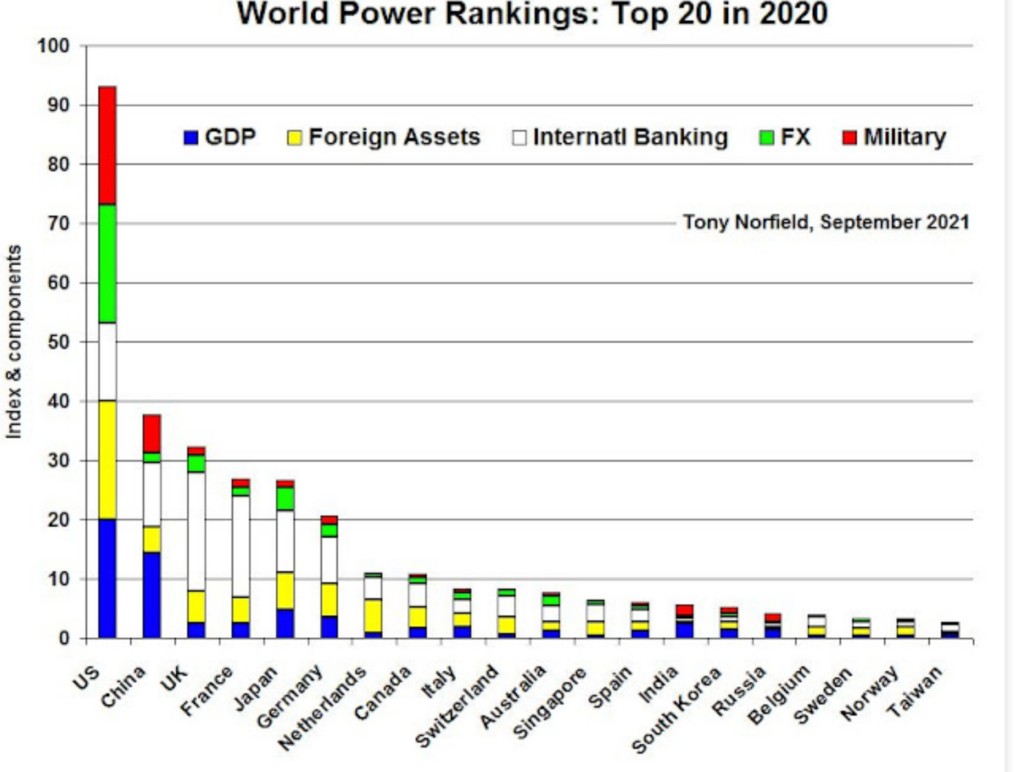 Nonetheless, other Marxists have also argued that Russia is not an imperialist nation as assessed by Lenin’s criteria.

Thesis 7: This is contested by – amongst others – in chronological order, Vaughan, Tooze, and Probost.

We first consider the non-Marxist, Tooze who does not use the term ‘imperialist’. Nonetheless he points out a major monopolist strength of Russia’s in the global energy markets:

“Russia is a strategic petrostate in a double sense. It is too big a part of global energy markets to permit Iran-style sanctions against Russian energy sales. Russia accounts for about 40 percent of Europe’s gas imports. Comprehensive sanctions would be too destabilizing to global energy markets and that would blow back on the United States in a significant way. China could not standby and allow it to happen.

Furthermore, Moscow, unlike some major oil and gas exporters, has proven capable of accumulating a substantial share of the fossil fuel proceeds. Since the struggles of the early 2000s, the Kremlin has asserted its control.”

The notion of monopoly was earlier highlighted by Vaughan in 2017:

“In Russia there is an extreme concentration of capital, to a degree that exceeds the imperialist powers of Lenin’s time. Based on the official statistics of the Russian state, the top 600 firms in Russia account for over 70% of Russia GDP.”

Moreover Vaughan goes on to highlight the role of banking finance:

“Today, Sberbank is the largest bank in Russia, and the 3rd largest bank in Central and Eastern Europe. It has an annual operating income of 28 billion USD, and deposits totaling 312 billion USD. This amounts to approximately 36% of the total deposits in Russia (849 billion USD) concentrated in a single financial institution. The breakdown of the deposits, and their share of the total, of the five biggest banks (by total assets) in Russia today is as follows:

Vaughan also goes on to point out the role of export of capital:

“These large firms in Russia also export significant amounts of capital abroad. A few examples: Gazprom has subsidiaries in 36 countries outside of Russia, in 2016 Rosfnet (the 3rd largest company in Russia) purchased a 98% stake in the India-based oil company Essar Oil for ~$13 billion, and overall Russian direct investment abroad exceeds $440 billion. While this pales in comparison the ~$5 trillion that the US has in foreign direct investment abroad, it still represents a significant export of capital.”

More recently in 2022, Probsting reminds us that Lenin pointed out:

“Some imperialist states have had a strong economy as well as a powerful military, while other, more backward, powers were characterized by Marxists as imperialist despite having a relatively small amount of capital exports or no net capital exports at all.”

Thus, Lenin wrote in 1916: “The last third of the nineteenth century saw the transition to the new, imperialist era. Finance capital not of one, but of several, though very few, Great Powers enjoys a monopoly.”

Therefore Probsting – in a similar manner to Norfield, but not by using a quantified tool – proposes that the definition of imperialism be modified to being:

“The imperialist character of a given state is based not on a single criterion (like the volume of capital exports) but rather on the totality of its economic, political, and military features. Hence, a scientific definition of an imperialist state would be “a capitalist state whose monopolies and state apparatus have a position in the world order where they first and foremost dominate other states and nations. As a result, they gain surplus-profits and other economic, political, and/or military advantages from such a relationship based on super-exploitation and oppression.”

Probsting goes on to make similar points as Vaughan, namely regarding the role of monopoly in the Russian state: “Russia’s economy is primarily dominated by Russian monopoly capital. (i.e not foreign based) … “the proportion of investment in Russian, foreign, and joint venture companies kept the same for the past five years: 86.3%, 7.3%, and 6.4%,respectively;” and on the amount of monopoly in Russian banking.

But Probsting also enlarges on the theme of capital exports by Russia – and details a recent imperialist practice of ‘round-tripping’. This entails sending monies to an off-shore haven only to re-direct those monies into either the Russian state or onto other states as an ‘invisible’ Foreign Direct Investment (FDI).

Moreover the destination of the Russian investment is strategic towards the Eurasian base. This is being created as we noted previously, where Russia has been establishing alliances, to establish secure arrangements on the Caspian Sea and its’ neighbouring states:

“On 7-8 August, 2016 in Baku was held tripatrial Summit of Azerbaijan, Iran and Russia – focused on regional security arrangements to the South Caucasus and to make a deal regarding Caspian Sea legal status disagreements among the littoral states.. (with) leaders of Russia and Iran and very soon the results were at hand. Moreover, on the second day of the Summit, Turkey’s President Receb Erdogan paid official visit and told how he identified with his “best friend” President of Russia’s Vladimir Putin either long-standing bilateral negotiations.”

Hence Probsting states that these same Eurasian countries serve as a focus of Russian super-exploitation:

“Russian monopolies also play an important role in the Eurasian countries, albeit more in some than in others. Two Russian economists provide the following assessment: “In 2014, Russian OFDI to the Eurasian Economic Union (EAEU [a Russia-dominated Eastern version of the European Union]) was close to $15.4 billion, which is equivalent to 4.0 percent of the total Russian OFDI. Both figures nearly doubled in two years (2012-14) after the creation of the Customs Union between Russia, Belarus, and Kazakhstan.”

Thesis 8: We are in agreement with Vaughan and Probst, and others – who would maintain that Russia is an imperialist state.

While Norfield’s formulations appear to us, not quite as clear-cut, we do not believe there is any essential difference with Norfield’s overall political conclusion.

Thesis 9: Not explicitly recognising the actions of Russian leaders and oligarchs, as having caused the problems in Ukraine (‘privatising’ of state owned enterprises, corruption at state level, funding of criminal leaders etc.) is dangerous.

It results in some calling themselves Marxists exculpating or denying crimes of Russian capitalists and Putin – as were conducted by Russia in Syria. There the Russian forces defended a corrupt Assad Government and participated in vicious actions against the Syrian people. Marxists in several countries proffered excuses that the war-crimes either did not occur, or were perpetrated by ‘the Syrian people themselves’.

Thesis 10: In this current crisis over the Ukraine – Marxists should recall Lenin’s words that show Marxists that they have more than one enemy alone.

“It is the duty of the socialists of every country to wage an unrelenting struggle against the chauvinism and patriotism of their own country (and not only of the enemy)”.