As the film starts, we listen to a narrative about an “accident” at work. A Polish worker was dragged into a machine in a meat factory. The circumstances are still unclear, but it was an “accident”. It was like the “Einzelfälle”, or individual cases, which are reported by the German news media whenever another white […]

As the film starts, we listen to a narrative about an “accident” at work. A Polish worker was dragged into a machine in a meat factory. The circumstances are still unclear, but it was an “accident”. It was like the “Einzelfälle”, or individual cases, which are reported by the German news media whenever another white gunman goes on a shooting spree outside a Mosque. The cynicism with which this phrase is used to avoid apportioning blame is notorious.

Regeln am Band bei hoher Geschwindigkeit is a documentary about working conditions for migrant workers at the Tönnies abattoirs. Since the film was shot, Tönnies has become renowned for owning the abattoirs whose insanitary conditions caused a spike in the German Coronavirus figures. There’s none of this here – filming had already wrapped before COVID-19 time, but enough evidence is produced to show us that this “accident” was just waiting to happen.

Director Yulia Lokshina shows us none of the inside of the meat factory – she knows that her cameras would not be allowed anywhere near. But she makes a virtue out of this necessity with ominous shots from outside the sinister building. Dark and mysterious, behind high fences, you get the feeling that something not quite right is going on inside.

One of her interviewees talks about the impossible living conditions in barracks – but these are the only homes available to its semi-legal residents. If they try to change their jobs, or even protest against their conditions, they will be thrown out. “That would make a great film, but you’d have no chance of filming that – not even a photo”, he laughs.

Lokshina intermingles interviews with workers, and their friends and supporters with scenes from a Munich school rehearsing St. Joan of the Stockyards, Berthold Brecht’s play about the meat industry which retains a shocking contemporary relevance despite it being nearly 100 years old. The kids are encouraged by a teacher who is so committed and enthusiastic that you can even forgive his man-bun and trendy beard.

We hear stories of increased speeds on the production line, of derisory pay, of women being forced to give birth in a garage. We listen to a worker who must either walk 20 km to work and back or take a lift which means he arrives at 1am for a 4am shift. We watch language classes, where the 6 Bulgarians can’t make it, because 4 couldn’t change their shifts and the other 2 have just given up. We also see some activists trying to organise the workers from the outside. Some workers look interested, but everyone is just tired.

Meanwhile the schoolkids are rehearsing the uprising. Their teacher looks occasionally frustrated. “Look at what’s being said”, he says. “Brecht is saying that religion just stabilizes the system and is part of the problem. Are you so alienated from religion that you agree? … He shows the social democratic response only to point out its inadequacy. He’s saying that the only reasonable response is violent revolution. What do you think?”

Some of the kids um and er, a couple of others give articulate but brief answers, but the main response is relative silence. One of the reasons for this may be the presence of cameras in the room, though this isn’t really considered. You get the feeling that Lokshina shares the teacher’s frustrated belief that the answer is clearly out there to anyone who cares to look, but also that not enough people are looking.

Meanwhile the real workers are interviewed. One Lithuanian worker starts well by showing utter disgust at the conditions in which he’s expected to work. He then goes on to warn us about the Bulgarians and Romanians who are “like gypsies – they steal”. Foreign workers may be all exploited by Tönnies, but they do not feel an automatic unity.

This is a film which shows a convinced anti-capitalism combined with revolutionary frustration. A “statement by the director” by Lokshina concludes as follows:

“In many places, the film is about things which are not visible, which are hidden: hidden caravan sites, forgotten work accidents, the extended time of the trip home in the night. Its about teachers who believe in protest and young people who don’t want to rebel. About invisible exploitation and vague helplessness in the face of the world economy and personal everyday life.

But also about the diffuse area in which we find ourselves with all our illusions and our naiveté. This area appears in the film between two plot strands which circle each other and comment on each other, between picture and music, which cuts up the meat into fragments and sews it back together.”

And yet for all the director’s apparent hopelessness, this is not an entirely pessimistic film. It shows us how things are and urges us to go out and change things. We should rise to its challenge.

This review first appeared on the CinePhil film blog. A German version will appear in the next marx21 magazine. 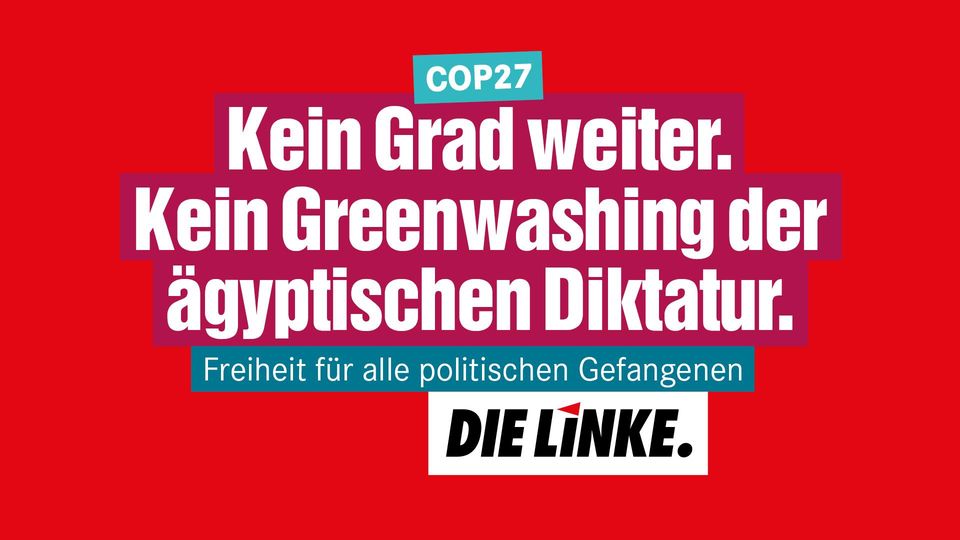 Photo Gallety: COP27: No Greenwashing of the Egyptian Dictatorship