Dominic Cummings. Typing the name causes an involuntary shiver of disgust. Cummings is currently the Chief Adviser to UK Prime Minister, Boris Johnson. Cummings was also the campaign director of the successful Vote Leave (pro-Brexit) campaign, and a special adviser to Michael Gove between 2007 and 2014. Some credentials. Despite often portraying himself – as […]

Dominic Cummings. Typing the name causes an involuntary shiver of disgust. Cummings is currently the Chief Adviser to UK Prime Minister, Boris Johnson. Cummings was also the campaign director of the successful Vote Leave (pro-Brexit) campaign, and a special adviser to Michael Gove between 2007 and 2014.

Some credentials. Despite often portraying himself – as an anti-establishment, northern outsider – the private school and Oxford educated Dominic Cummings is well in with the establishment. Variously described as “a cheat” [1], “a liar” [2] “a career psychopath” [3] and “Dominic Scummings” [4]; this odious man has pissed off a lot of people.

In an exclusive story broken by the Daily Mirror and Guardian newspapers on 22nd May, Cummings was found to have broken the very lock-down rules that he, as a government adviser, had helped to write. For those who have not been closely following the ongoing farce that is UK politics, read on for a shameful tale of contempt for ordinary people, a vile willingness to spread a lethal virus and undermine vital public health messaging, in exchange for one man’s selfish desire to do what he feels like.

The UK lock-down began too late. The shameful fact that the UK now has one of the highest excess death rates in the world bears testament to this [5]. From late February 2020 it was clear from the experience of other countries that a lock-down was required in order to stop the spread of Covid-19 throughout the UK. However, the Johnson government, advised by Cummings, spent a crucial period of time flirting with the idea of ‘herd immunity’ rather than taking action.

Although the government now deny that they had a herd immunity strategy, it was spoken of in public several times, including by Sir Patrick Vallance, the government’s chief scientific adviser. [6] Prime Minister Johnson famously said in his press conference on 12th March: “I must level with the British public: many more families are going to lose loved ones before their time”.

After this strategy was met with disapproval from many scientists and the public and the predicted death rate of this strategy was calculated at 250,000 deaths [7], the government changed tack and belatedly announced a lock-down on 23rd March 2020.

The Sunday Times reported that Cummings was arguing against the government implementing lock-down measures at a private event towards the end of February. His view was summarised as “if that means some pensioners die, too bad”. [8] Cummings and Downing Street deny that he said this.

Once the UK lock-down was announced, the rules were fairly clear. People with symptoms of Covid-19 were to self-isolate at home for 14 days, along with the rest of their household. Outside trips for those without Covid-19 symptoms were limited to infrequent shopping trips for necessities and one form of exercise per day. Visiting family members outside of the household was prohibited. Essential travel was permitted but expressly did not include visits to second homes or similar, whether for isolation purposes or holidays.

Cummings’ wife, Mary Wakefield, a commissioning editor for right-wing publication The Spectator, became ill with Covid-19 symptoms in late-March. Cummings first broke the lock-down rules by going to work when Wakefield had symptoms. Cummings, Wakefield and their 4 year old son then drove 260 miles north to Durham to stay at Cummings’ parent’s farm, which has a cottage in the grounds and a private woods. The reason given by Cummings was that it was necessary in order to access child care for his son. During their time in Durham, Cummings also drove his wife and child to Barnard Castle, a scenic town half an hour’s drive from his parent’s farm, on his wife’s birthday.

When the Cummings breaching lock-down story broke there was a huge swell of anger towards him all across the UK. Thousands of ordinary people who had followed the lock-down rules and been unable to care for or visit sick and dying loved ones took to social media to express their outrage at his selfishness, and his being apparently ‘above the rules’.

Forty-five Tory MPs openly called for his resignation, with many more muttering anonymously to the press. Journalists wrote critical opinion pieces calling for him to be sacked, including for The Spectator; Wakefield’s publication. [9] The leaders of two opposition parties, the Scottish National Party and the Liberal Democrats, called for him to resign. The leader of the Labour Party, Sir Keir Starmer, was notable in his silence. Even the virulently right-wing Daily Mail newspaper led with a headline calling for him to be sacked.

However, the UK government rallied round their man. Johnson stood by his Chief Adviser, insisting that Cummings was correct to act in this way, stating “I think he followed the instincts of every father and every parent. And I do not mark him down for that”. Cabinet ministers including Health Secretary Matt Hancock, Foreign Secretary Dominic Raab and Chancellor Rishi Sunak tweeted in defence of Cummings.

“It’s reasonable and fair to ask for an explanation on this. And it has been provided: two parents with Coronavirus were anxiously taking care of their young child. Those now seeking to politicise it should take a long hard look in the mirror”. [10]

Essentially, this felt like a big ‘screw you’ to all parents who had followed the lock-down rules despite also caring for young children. In some cases people were unable to be with their dying children or attend their funerals. In this interpretation of events, Dominic Cummings – a man who put his small child in a car with a symptomatic parent for several hours and drove the virus to another part of the country – is a better parent than you plebs who cared for your kids at home to protect others and contain the spread of the virus. “How dare you, the public, politicise this?” Sickening.

Cummings was allowed to give his own press conference in the Downing Street Rose Garden, a very unusual thing for a special adviser to do. Advisers are not supposed to become the story, their role is supposed to be advising behind the scenes, but Cummings is different. An extra-special Special Adviser. Cummings’ defence of his actions was both patronising (“I understood the rules and did the best for my child”, unlike you plebs) and bizarre (“I drove to Barnard Castle in order to test my eyesight.” Yes, really).

The infuriating thing is, that now the media frenzy has died down, he seems to have got away with it. He has not offered to resign, indeed said that he never considered resigning, and has not been sacked. He is carrying on as normal, when so many people who have followed the rules cannot. He is sticking two fingers up at all the non-special people who followed the rules for the greater good. So much for his anti-elitism.

The Prime Minister’s chief adviser breaking the lock-down rules has, perhaps fatally, undermined the public health messaging of the government: stay at home, do your duty, we are in this together. A YouGov poll carried out on 3rd June found that 21% of people polled said that in the week following the story breaking they had followed the lock-down rules less strictly. Of this group, a third cited Cummings as the reason. [11] “If he is above the rules”, people may think, “why should I follow them? If he went out repeatedly, then it must be safe for me to do so”. No one likes to be told ‘do as I say, not as I do’ by those in power.

This undermining of important public health messaging could have a significant impact on the UK’s containment of the virus. In the last week, the UK government has announced a relaxation of the lock-down, perhaps in an attempt to justify Cummings’ breach of the rules, perhaps in pursuit of the herd immunity strategy that they definitely aren’t pursuing. All of the scientific evidence suggests that it is far too soon to be doing this. By backing Cummings the government have lost any moral authority they had on this issue. If the government later needs to lock-down harder again, will people comply?

The question that needs to be asked is, why is Dominic Cummings so important to the UK government? How does this man who was not elected and is not accountable for his actions wield so much power? The Tories have seriously damaged their credibility and their position in the opinion polls by not sacking him. It would make political sense to sack him and move on.

Does he have scandalous dirt on the PM, and/or other senior ministers? Is the PM completely incompetent, unable to do his job without his ‘Svengali’ at his side? Are the rest of the cabinet also devoid of competence? Do they buy into the idea that he is an anti-establishment genius who can connect to working class voters in a way that they cannot? Or is it a case of simple ruling class solidarity?

I reckon it’s probably a mixture of all of the above. The UK has a weak, incompetent PM and a cabinet lacking in conviction and ideas that believe Cummings is essential to keep their operation going. He may have dirt on them and he is one of them, a member of the elite he claims to disdain.

Either way, if there is a second wave of Covid-19 deaths in the UK, Scummings will have innocent blood, the blood of our loved ones, on his hands.

Anna Southern is an active member of Labour Berlin. This article was written for theleftberlin.com. 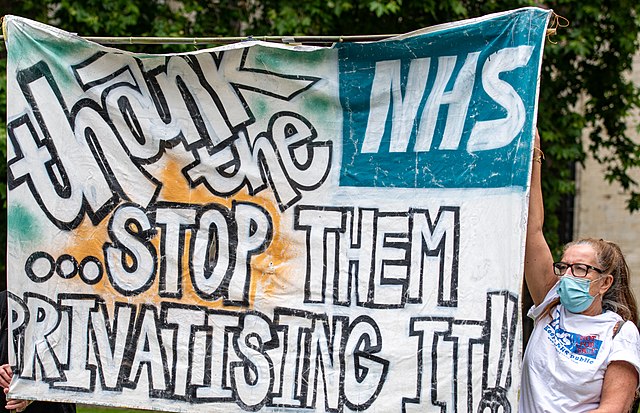